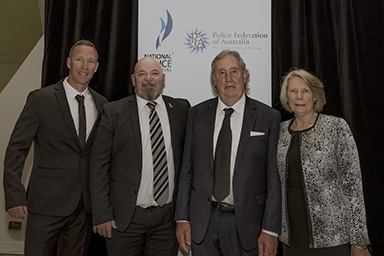 The National Police Bravery Awards is an award for police by police that transcends state and jurisdictional divides. After a hiatus due to Covid, the fifth event was hosted by the Police Federation of Australia on Wednesday, 21 September 2022 at the National Museum of Australia.

On 17 March 2020, S.C. Hammant was called to Cutler Drive in Wyong on the Central Coast of NSW to respond to an incident involving a heavily armed offender in dispute with neighbours. The offender fired more than 200 rounds, killing one man and injuring others.

S.C. Hammant organized for officers to go to the rear of the houses under fire in Cutler Drive and Maple Circuit to help residents to escape. While shots were still being fired, he went through the back of the house where the man had been killed and helped to get the rest of the residents out unharmed.

While many other officers displayed great bravery, S.C. Hammond was acknowledged as being the first to step into a dangerous situation. He coordinated the rescue response and helped ensure the residents were out of harm's way. He also ensured that his other officers were in safe positions while the offender was firing.

The officer that nominated S.C. Hammant for the Award was on the scene when the incident occurred. He said he was "the bravest officer I have ever seen."

When accepting the Award, Benjamin spoke about the bravery of every officer there and felt this was an award he accepted on behalf of every one of them. In an emotional moment, he thanked his wife for her ongoing support, reminding everyone in the room of the importance of family. He also paid tribute to his team and supervisors, whom he credited with his recovery from the trauma of that job.

On the morning of 2 January 2021, Senior Constable Kelly Foster undertook a canyoning expedition with a small group at the Wollongambe Canyon One, Mount Wilson. The group commenced their journey and made their way through the upper sections of the canyon. By midday, they had entered the water section of the canyon, where fellow canyoner Jennifer Qi entered the water on her lilo and made her way downstream. During this time, she unwittingly entered a whirlpool and was pulled underwater.

After being alerted to the situation by other group members, without hesitation for her own safety, S.C. Foster entered the water, making her way towards the fast-moving whirlpool and grabbed Jennifer's hand while she was submerged, valiantly attempting to rescue her. Unfortunately, a short time later, both women were pulled three metres underwater by the whirlpool and were unable to resurface.

Kelly is survived by her father Terry and mother Marilyn, her sister Leigh and her brother Adam, her partner Gavin and an extended family. She was posthumously bestowed with the Commissioner's Valour Award for bravery at her funeral at Lithgow in January 2021.

Accepting the Award, Terry spoke of the outpouring of love and support from the blue family following the death of his beautiful daughter.

PANSW President Kevin Morton said both winners were worthy recipients, deserving of the recognition as a credit to their families and workmates in their service to the broader community.

"Both the recipients showed extreme courage, leadership and initiative in the most dangerous circumstances." He said.

"S.C. Hammant and S.C. Foster went above and beyond in the performance of their duties and we should be proud as they exemplify the greatest traits of the NSWPF."