From Bush To Posts 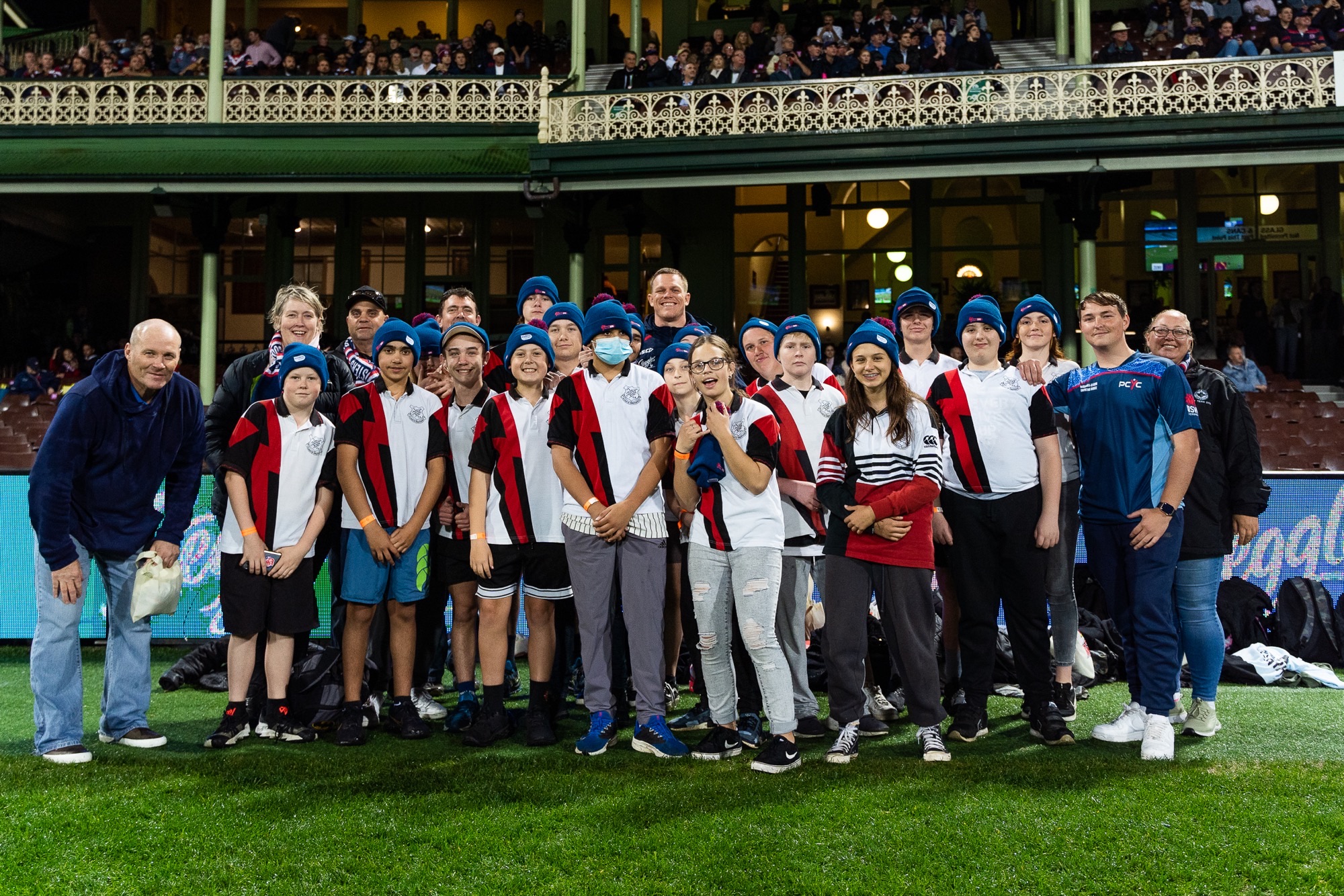 Through the Central North Police District's Bush to Posts program, students living in outback NSW realised their dream of watching the Sydney Roosters in action at the hallowed Sydney Cricket Ground.

A group of Lightning Ridge Central School students was rewarded for their efforts in and away from the classroom when they attended a live NRL match at the Roosters' home ground on Thursday 4 August 2022.

The students formed the guard of honour as their heroes ran out onto the famous turf. They also had the chance to meet the squad members before the Round 21 match in what was a unique and memorable experience.

The Bush to Posts program was the brainchild of Central North Police District Detective Inspector Paul Quigg. 'Quiggy' and Sergeant Mark Pitt (formerly of Brewarrina Police Station) began the program to incentivise local kids to remain engaged at school through their love of rugby league.

Detective Inspector Quigg touched base with Easts' legend Anthony Minichiello, with whom he had an association as a former trainer of the Italian Rugby League team. Together, they worked to form a partnership between the Central North Police District and the Roosters.

"We wanted to give these kids an opportunity to come down to a game while teaching them the benefits of school attendance and making the right decisions in life," Paul says.

"These kids do it tough. Unfortunately, some have no one to care for them or only one parent. Often their diet and nutrition are not the best. They struggle with their mental health and education while living and attending school in these remote outback communities.

"We came up with the idea of the Bush to Posts program so we could help mentor these students to build brighter futures by trying to guide them to finish their secondary education. We want to put them in the best position to find a career after school".

The results have been overwhelmingly positive since the program began. A bus full of students made their way from Lightning Ridge to Sydney to enjoy the bright lights and theatre of the NRL.

The excitement on the kids' faces during the trip said it all to the staff involved in the Central North Police District Bush to Posts program. For many, it is the first time they've been over the Blue Mountains, let alone to Sydney.

"A lot of the kids don't like going to school and doing their schoolwork, so this program gave them something to strive towards."

"Like emergency services in these remote communities, teachers do the hard yards due to a lack of staff. Many classes are combined, so it can be challenging for these children to have a good education. Thanks to this program, the kids have been doing their homework and attending class.

"Once they start doing their homework, they quickly realise that it needs to be done to put them in a position to succeed in life. The students' attitudes, manners and interactions with the school teachers have come ahead in leaps and bounds."

One of the success stories from the program is Quintin Bolton. The self-confessed Chooks' fanatic emulates Captain and fullback James Tedesco when he takes to the field for the Lightning Ridge Redbacks.

The 14-year-old Gamillaraay boy said the hard work he put in at school was worth it as he witnessed his beloved Tricolours claim a 34-16 win over the Brisbane Broncos up in the Victor Trumper stand in person at the Sydney Cricket Ground.

"It's been great; the program is run well. I've gotten enjoyment out of it and plenty of learning as well. It was a good feeling when I was told I'd be watching a live game of footy between the Roosters and Broncos".

"I knew I had to start working hard to get here. It's been worth it, every second of it. It's amazing. I never thought I'd be able to do it. I'd say to the other students, 'just put your head down and work towards it. Once you do it, you'll be so happy that you did'".

Along with the Sydney Roosters, Paul would like to knowledge the following staff and sponsors who made the Central North Police District Bush to Posts program possible: Sergeant Mark Pitt, Senior Constable Therese Carroll, Clare Reed from the Sydney Roosters Rugby League Football Club, Tara Coleman from PCYC – Eastern Suburbs, Blake Reavell, Necia Benjamin from Lightning Ridge Central School, Luke White from the PCYC, Daniel Kennedy the bus driver, Peter Cominos and Gail Dwyer from the Sydney Cricket Ground along with CatholicCare, Mission Australia and the Department of Communities and Justice