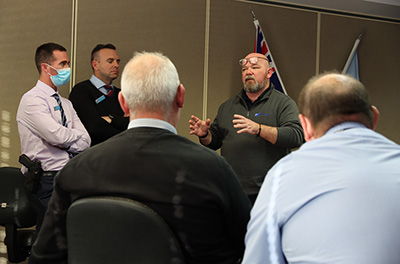 The Wagga Wagga branch of the PANSW was proudly reinstated last month.

Inspired by PANSW President Kevin Morton’s speech at Conference, long-time PANSW branch official Steve Marsh decided to take the lead in re-invigorating the branch and reached out to PANSW Organisers Marty Evans to discuss the idea.

A traditionally strong branch, Wagga Wagga had fallen by the wayside after several transfers without a proper structure in place.

On Tuesday 19 July, PANSW President Kevin Morton attended a special meeting in a show of support for the newly re-formed branch, running the election process which saw Steve nominate as Chair.

Once the formal proceedings were concluded, The President spoke to the assembled group, sharing his vision of the Police Association. PANSW managers Tony Bear and Paul Hannan then discussed the significant role of branch officials in navigating the political landscape, equipment, and work health and safety issues.

“I applaud Steve for his efforts in reaching out. To be in the Command for a few years and then to put his hand and step up to get the branch re-engaged was fantastic.” Kevin says.

If history is anything to go by, the outlook is reassuring. The branch has produced a long line of Executive Members. Newly elected Treasurer Roger Campton, who was previously the Executive Manager for the region, and Executive Member Ed Taylor were also present - show the high quality of the region’s representatives.

Seeing several new faces in the room engaged in the discussion was a positive sign for future succession planning.

“Branches don’t necessarily need to be made up by experienced people. You can have a couple of years in the job under your belt and still be interested in the branch and helping your colleagues.” Kevin says.

“Recruiting young branch officials and getting them engaged early in their career gives them the insight and confidence to step up when the time comes. If someone transfers out, you need people that are happy to put their hand up.”

Wagga’s reformation is an important reminder to all branches to remain connected, not just during the hard times but to be proactive about remaining engaged when things are going smoothly.

“It’s important for branches to connect regularly, not just prior to Conference or when an issue pops up.”

“Connect with each other often and have your own in-house meeting to ask if there is anything going or if we need to convey any information to our people. There are always going to be a few issues bubbling in every Command, no matter how well it is running, that necessitates the need for a strong branch.”