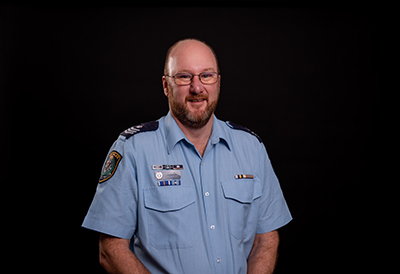 Q. Can you please tell me about your career background?

Q. What inspired you to become actively involved with the PANSW?

I have always been an active member of the Police Association but became more involved when I transferred out West. I recognised a need for greater advocacy for my fellow members, given the unique challenges of working in small country towns.

I continued to be actively involved and was elected as a Delegate to Conference in 2012.

Q. When did you join the Executive and what have been your most significant achievements while representing your region?

I was first elected to the Executive in 2017, and during the past five years, we have had many wins. The most significant outcome was the 1500 increase in staffing that we achieved.

During the campaign, I held numerous meetings with local politicians across the region, including the Shadow Minister of Police. In addition, I was involved in media interviews for both print and television media. With the assistance of Branch Officials across the region and staff from the PANSW, we were able to run the campaign effectively at a local level and state-wide. This campaign is an excellent example of the results that can be achieved when all levels of the organisation work collectively.

Q. What are the biggest challenges facing our members in the year ahead?

The State wages cap of 2.5% has considerably impacted negotiations for wage increases over the past 11 years.

This government policy was introduced in a very different financial climate than what we find ourselves in today. While we are in the middle of our current Award, removing this outdated policy will allow proper negotiations to take place in the lead-up to the expiry of our current Award in 2024.

Q. What do you see as our biggest organizational priorities moving forward?

The 2022 Biennial Conference will be the decision-making body that sets our priorities for the next two years, with policy direction decided by the delegates. It is then up to the Executive to pursue these priorities and deal with matters arising along the way.

Q. Reflecting on your time as part of the Executive, was there anything else you wanted to add?

I have thoroughly enjoyed my time on the Executive representing the Southern Area 1 over the past five years. I want to thank Executive Officers Tony King, Kevin Morton and Craig Partridge for their leadership, my fellow Executive Members and our dedicated staff. The results we have achieved over the past four years, despite challenging circumstances throughout, have left our members in a much better position than they were in 2018.