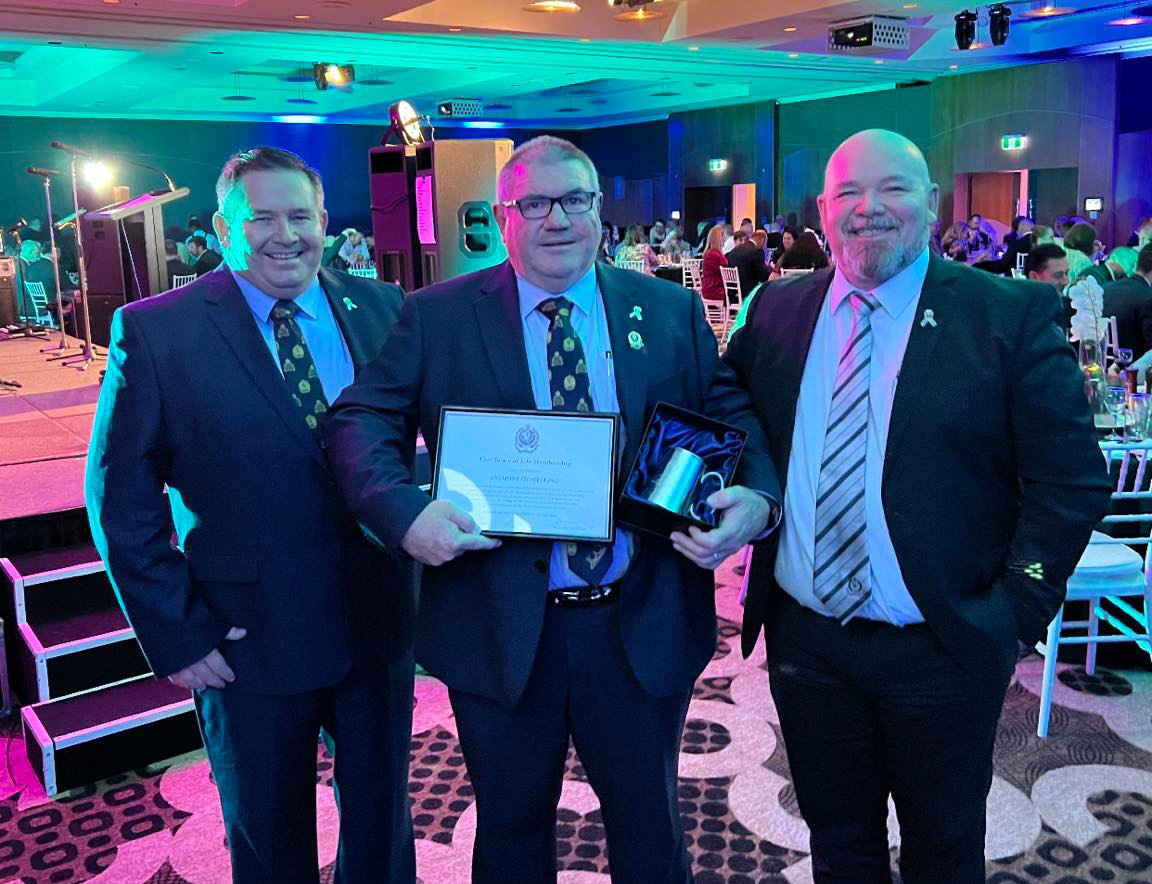 Outgoing PANSW President Tony King would never have predicted the challenges that lay ahead when he sat down in the President’s chair in 2018.

What he knows is the job prepared him for the step up.

“It’s been a great teacher when it comes to leadership and perseverance.”

Growing up in Western Sydney, Tony always looked up to his uncle who was a police officer and said it was “all that I ever wanted to do.”

He joined the NSWPF in 1989 and has risen to the rank of Detective Senior Constable during his 29 years of service.

Beginning in General Duties in Fairfield in 1989, he transferred to Moree before moving into Special Operations.

The country in his bones called. He moved to Deniliquin in 1995. He then landed in his beloved home patch of Grafton in 1999, completing the Detectives Designation before moving to Rural Crime Investigations in 2012.

Tony’s passion for advocating on behalf of the membership began when he was elected as a Branch Official in 1999.

“My boss dobbed me in for it at the time, but I was immediately invested.” He recalls with a laugh.

He stepped up to serve as Executive Member for the Northern Region from 2008-2014.

At the 2014 Biennale Conference, he was elected as Treasurer and oversaw the organisation’s strong financial growth over the next four years – in a period where spending on legal assistance and member welfare had increased.

In 2016 while standing in as President, Tony penned an editorial that was published in the Daily Telegraph staunchly defending the officers involved in the Lindt Café shooting during the coronial inquest.

As an accredited hostage negotiator since 1997, he was outraged at the unbalanced coverage and uninformed public commentary about police operations.

“The murder of Tori Johnson and the death of Katrina Dawson were tragedies caused entirely by the actions of Man Haron Monis armed with a shotgun and presumed to be carrying a bomb.” He wrote, “These are facts that appear to have been lost in the recent feeding frenzy of public comment.

“On behalf of the membership, I wish to publicly thank all of those involved. Despite what has been written and reported, your efforts ensured that there was minimal loss of life — and the safety of all involved was the focus.”

Ascending to the top

Post-Conference, The PANSW launched The Back The Blue campaign– calling for police numbers to be significantly bolstered - mobilising branches in a coordinated campaign,

That same year, he stood beside then-Premier Gladys Berejiklian as she announced an additional 1,500 blue shirts would hit the streets over the next four years.

“It’s a huge outcome for the Association - the largest injection of police in 30 years.” He says.

Lobby the Government to recognise the work of the blue family during the pandemic by lighting up the Opera House Sails still moves him today.

“It was special to see the Police Remembrance Ribbon commemorated on such a unique landmark.”

NSW experienced crippling drought, bushfires, floods and a mice plague and the emergence of the coronavirus.

And Police were there - assisting returning travellers during hotel quarantine, undertaking deployments to NSW-Victorian border and supporting the Northern Rivers Flood Relief effort.

Despite the challenges, Tony was continually amazed at the fortitude and positivity of members and PANSW staff alike.

“Through it all, the members have gone above and beyond to serve their communities with a smile and a helping hand.

“The PANSW Executive and staff who supported our members to perform at their best during this time were exceptional.”

Back to the bush

In the bittersweet lead-up to his departure, Kinggy has made it no secret that he’s excited to return to the bush.

He’s very much looking forward to packing up the car with beloved wife Kerry and their dog and putting the Harbour Bridge in the rear-view.

A long-awaited return to country policing is on the cards, where the days can vary from investigating stolen cattle to trekking across dirt roads to break up the occasion bush doof.

He might even have time to reflect, sitting on his veranda and taking in the view.

Ultimately, he’s grateful for the opportunity he’s been given.

“This experience has made me proud to be a police officer.

“To the members and the PANSW Executive and staff, thank you for your support and the opportunity to serve as your President. It’s been a great honour.”