NSW LOSING POLICE RECRUITS AS A RESULT OF PROHIBITIVE COSTS 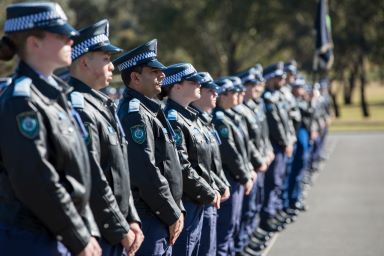 NSW is staring down the barrel of a severe police shortage, with potential police recruits joining interstate police forces or giving up on their dream altogether because of prohibitively expensive entry requirements to join the NSW Police Force.

President of the Police Association of NSW Kevin Morton said the situation is so dire in NSW that the next course scheduled to train new officers in NSW, scheduled for June, has already been cancelled because there weren’t enough applicants.

“We’re missing out on quality potential police officers in this state because people simply can’t afford the application process,” Mr Morton said. “As a result, we’re staring down the barrel of a serious police shortage in this state in the very near future.

“NSW is the only jurisdiction in the country, and perhaps the world, where potential police have to fork out thousands of dollars and spend months of their lives training just to apply to be in the police force.

There’s not even a guarantee of a job at the end of it, so it’s no wonder people aren’t applying.

“We should be looking to attract the best and brightest, not just those who can afford it.

“You shouldn’t have to choose between paying your mortgage and looking after your family or joining the police.”

Mr Morton said despite having to pay their own way and forgo many months of potential earnings elsewhere, police going through the application process are still subject to professional standards, as though they were employed.

“You’ve got cops going through the application process who are forced to live away from their families and live under quite strict rules, which can include not leaving the training facilities, and they’re not even getting paid for it – in fact, they’re paying out of their life savings to do it.

“The system in NSW is set up to effectively block anyone who doesn’t have a lot of savings or responsibilities from entering the police. We should be encouraging people with life experience into the job, not discouraging them.”

“Everyone who has joined the police in recent times has shown dedication and sacrifice to become a cop. We feel we are excluding too many quality candidates by demanding they do so."