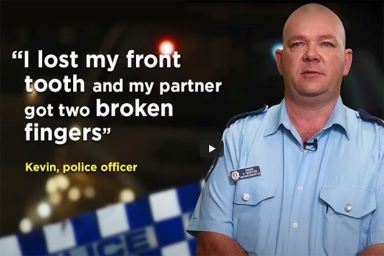 Assaults on police cause pain, injury, trauma and frustration for all police officers. It also results in lost time as injured officers are forced to miss work.

The rate of assaults on police in NSW is falling and is lower than most other jurisdictions in Australia, showing that efforts to protect police officers have had an impact.

However the PANSW continues to advocate to the NSW Government and community that the number of assaults on police is still too high, and more needs to be done to protect police and hold offenders accountable.

The NSW Parliamentary Inquiry into Assaults on members of the NSW Police Force was carried out by the Legislative Assembly Committee on Law and Safety.

The PANSW President Tony King and Research Officer Dr Kate Linklater also gave evidence in person at a hearing of the Committee, and a transcript of that Hearing is available on the Committee webpage.

As a result of our advocacy, the Committee made a number of valuable recommendations to protect police, including:

Prevent offenders who assault police from reoffending -  Reduce the risk of violence in community interactions: the NSW Police Force - Enhancing mutually respectful relationships - You can find the report on the Committee webpage (click here) and the Government Response (click here).

Police officers suffer significant harm as a result of the aggression, abuse and violence
frequently directed towards them. Every assault on a police officer affects the victim officer, their colleagues, and the entire policing family.

Therefore the PANSW submitted to the NSW Sentencing Council that NSW should:  View the PANSW Submission here.

The PANSW is incredibly disappointed with the response of the Sentencing Council. It made no recommendations relating to sentencing of offenders who assault police.

The PANSW will continue to advocate to Government and Parliament to make sentencing of offenders who assault police just, and protect the men and women in blue while they protect us.